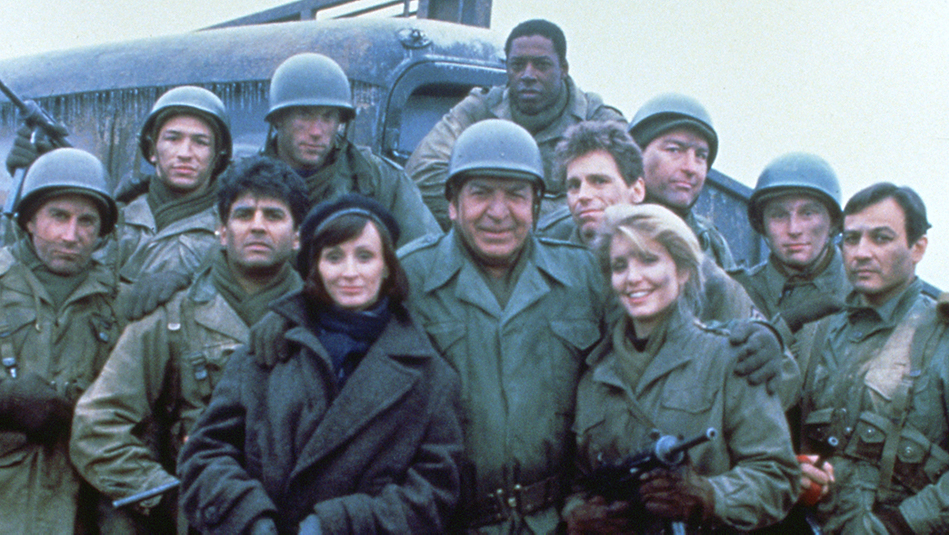 THIStory of ‘The Dirty Dozen’

Our THIStory series takes a look at the history behind some of the most iconic franchises that air on THIS. In this installment, we’re examining The Dirty Dozen, one of the most recognizable war movies ever made.

The 1967 war movie The Dirty Dozen is well-remembered for its ensemble cast, its thrilling storyline, and its blockbuster performance at the box office. And though the film will forever be associated with Hollywood moviemaking, it actually has its roots in real WWII history. The movie is based on the 1965 novel of the same name by E. M. Nathanson. Nathanson’s story about a group of ex-convict paratroopers who are sent on a dangerous mission was inspired by a real group of U.S. paratroopers from the war called the Filthy Thirteen. Although the real members weren’t hardened criminals like their literary and film counterparts, they had a reputation as rough and tumble troublemakers, which may be where the jailbird rumors came from.

The novel was a bestseller, so it wasn’t too surprising when Hollywood came calling about a film adaptation. What was surprising was the sheer amount of talent that MGM was able to squeeze into the movie. The Dirty Dozen starred Ernest Borgnine, Charles Bronson, Jim Brown, John Cassavetes, George Kennedy, Telly Savalas, and Donald Sutherland, among others, making it one of the most star-studded affairs of the decade.

With the film’s tremendous financial success (it was one of the highest-grossing films of 1967), a sequel wasn’t exactly unexpected. But what was unexpected was how long it took to get one made. A number of made-for-TV sequels were finally produced in the 1980s, at the height of the Cold War when American pride in the military was arguably at its highest level since before Vietnam. The three films, all of which saw Borgnine reprising his role of Major General Sam Worden, continued the story by finding missions for a new batch of soldiers to go on. First was 1985’s The Dirty Dozen: Next Mission, which also starred Marvin and Richard Jaeckel from the original film. Then came 1987’s The Dirty Dozen: Deadly Mission and the similarly-named The Dirty Dozen: Fatal Mission in 1988, both of which brought back Savalas from the original film, though in a different role. Also in 1988, a Dirty Dozen TV series premiered on the then-new broadcast network Fox, but it failed to last a full season, closing the book on the franchise’s television presence in the ’80s.

Though The Dirty Dozen franchise has been dormant for over 30 years now, it could soon come roaring back to life. David Ayer, the director of Suicide Squad — a film whose plot bears more than a passing resemblance to The Dirty Dozen — has recently announced his intentions to reboot the property in a modern-day setting, which just goes to show you that the war movie’s tale of redemption and courage under fire is as relevant today as it was in the ’60s.