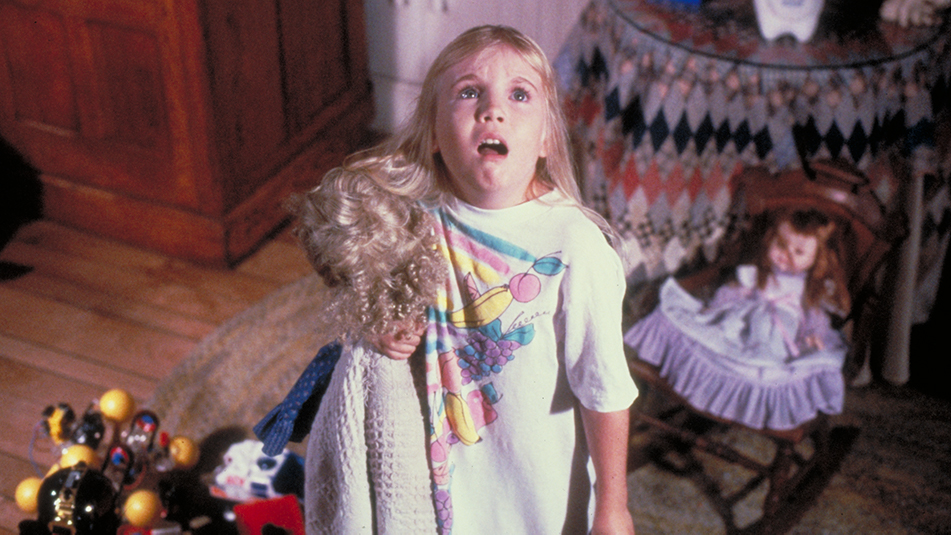 Our THIStory series takes a look at the history behind some of the most iconic franchises that air on THIS. In this installment, we’re examining the Poltergeist franchise, one of the spookiest series around.

That line, spoken by child actor Heather O’Rourke in 1982’s Poltergeist, remains one of the most iconic — and most frightening — lines in horror movie history. And while the film is certainly well-remembered for its many horrific scenes (like the infamous clown doll), it’s at least as famous for its behind-the-scenes drama. Few films have as many urban legends attached to their productions as this one, and even fewer have had as many of their legends turn out to be true. Did producer and writer Steven Spielberg really direct the film, and not credited director Tobe Hooper? According to many accounts, yes. Yes, he did. Were the skeletons seen in the film actual human corpses? Apparently, they were. Is the film series cursed? We’ll leave that one up to your personal belief, but there has been an inordinate number of tragic and unusual deaths related to those involved with the trilogy’s production. The Poltergeist franchise has a mythology attached to it that few other series can match, which only helps it stake its claim as one of the most iconic horror franchises ever.

The original film tells the story of the Freelings, an ordinary suburban family whose home is invaded, and their daughter kidnapped, by evil spirits. The movie’s genuine scares, innovative special effects, and typical ’80s Spielbergian family storytelling combined to make it a megahit, and it was one of the highest-grossing films of 1982. Its success spawned a franchise that continues to this day, and which shows no signs of slowing down anytime soon.

Poltergeist II: The Other Side premiered in 1986, and featured the bulk of the cast reprising their roles. The story fleshed out the main villainous spirit from the original film, giving him an identity and a backstory. It also leaned more heavily into creature feature territory with some of its designs; designs that earned the film an Academy Award nomination for Best Visual Effects. And while it didn’t quite duplicate the box office success of its predecessor, it was still a hit, which led to Poltergeist III two years later. In that film, the action was moved to a Chicago skyscraper, with only two actors from the original film returning. The film marked the tragic end of the original trilogy, as prior to its release, 12-year-old star O’Rourke — whose character was the catalyst for the films’ ghost activity and was the only member of the Freeling family to appear in all three films — died from a congenital intestinal blockage.

O’Rourke’s death marked the end of the original series of Poltergeist films, but the franchise would eventually continue in other ways. In 1996, a spinoff TV series debuted called Poltergeist: The Legacy. The show didn’t share much in common with the films outside of its title, but it still proved popular enough to remain on the air for four seasons totaling 88 episodes. The franchise then returned to theaters in 2015 with a remake. The movie, simply titled Poltergeist, didn’t have the cultural impact or critical acclaim as the original, but it was still a financial success, earning $95 million at the box office. A new remake or TV series may also be on the way, with Avengers: Endgame directors Joe and Anthony Russo rumored to be interested in developing the property.

Regardless of what the future holds for Poltergeist, it remains one of the scariest franchises ever. And you can experience its frights firsthand by tuning into Poltergeist II and Poltergeist III back-to-back on THIS, starting at 5 pm/4C on Saturday, Feb. 1.