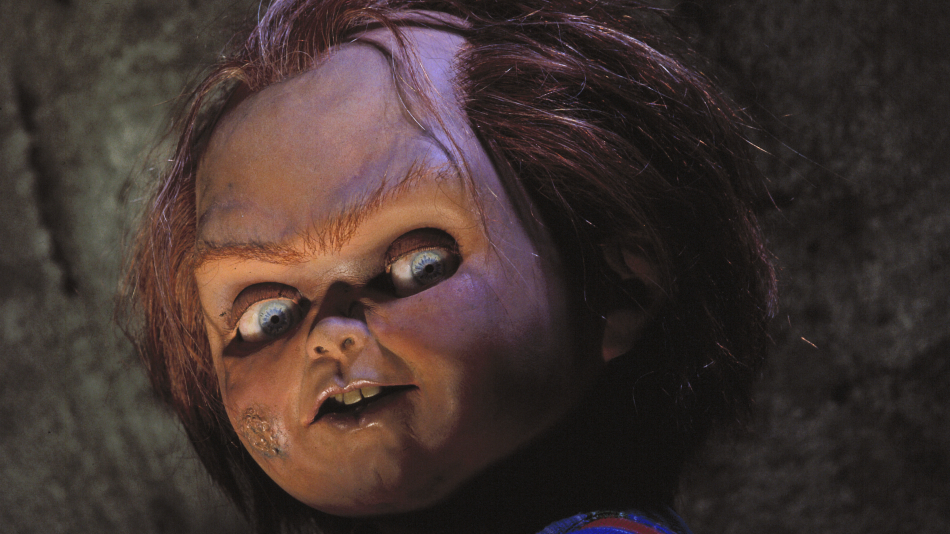 There are only a few horror movie villains who can rightfully be called pop culture icons. Freddy Kreuger. Michael Myers. Jason Voorhees, and, of course, Chucky. Seemingly the least-threatening of the bunch, the killer doll has been a mainstay of movie horror for over three decades, and the little guy shows no signs of slowing down anytime soon. So join us for a rundown of the murderous toy’s history, from his groundbreaking 1988 debut through his hi-tech 2019 makeover.

The Child’s Play franchise began in 1988 with its eponymous first film. Created by Don Mancini and directed by Tom Holland, the movie rewrote the book on the slasher genre by featuring a diminutive antagonist who was every bit as frightening as his more monstrous contemporaries. It tells the story of serial killer Charles Lee Ray, who uses a Voodoo spell to cast his soul into a “Good Guy” doll prior to the death of his physical body. After Chucky, the doll containing Charles’ soul, is gifted to a young boy named Andy Barclay, it continues Charles’ killing spree in horrific fashion.

The movie was a financial success and a cultural sensation, and it wasn’t long before Chucky found himself as the head of a new horror franchise. Child’s Play 2 arrived in 1990, with Child’s Play 3 following just nine months later in 1991. Both films continued the main storyline of Chucky stalking Andy while also introducing some of the comedic elements that would eventually become a franchise hallmark.

It would be another seven years before the franchise saw its first major reinvention with 1998’s Bride of Chucky, which nixed Andy from the plot and gave Chucky a female counterpart named Tiffany. Far less of a horror movie than its predecessors, the new film leaned heavily into comedy and campiness, charting a new direction that kept the franchise relevant well after ’80s-style slasher films had gone out of fashion. 2004’s Seed of Chucky got even more comedic and self-referential, having actress Jennifer Tilly — the voice of Tiffany — play herself in the film. By this point, the series had gone full parody and bared little resemblance to the original horror trilogy, and though the film was a modest box office success, it would be the last film in the franchise to be released in theaters for over a decade.

The next two movies in the franchise — 2013’s Curse of Chucky and 2017’s Cult of Chucky — were both direct-to-video affairs that offered a sort of soft reboot of the franchise. While maintaining some of the humor and continuity of its direct predecessors, the films also returned to the basic horror formula of the original films by having Chucky stalk a family and go on murderous rampages. While enjoyable to many longterm fans of the franchise, the direct-to-video status of the films was a slight to the box office success and cultural force that bore the franchise. And so, in 2019, Child’s Play was given a hard reboot.

The new Child’s Play started over from scratch. The storyline of a Voodoo-powered serial killer was out, and its place was a hi-tech doll sporting a corrupt AI. The new Chucky looked and acted differently, but he was just as evil and deadly as his more mystical progenitor. The film, which was the first in the franchise to not have the involvement of series creator Mancini, is the most pure-horror franchise installment since the original, while still maintaining some of the series’ dark humor. The formula worked, as the film was both a critical and commercial success, with even horror icon Stephen King choosing it as the new film to watch last Halloween in an interview with Entertainment Weekly.

Thanks to his uncanny ability to adapt to changing tastes, Chucky has been able to stay relevant while other ’80s slasher icons have been relegated to the ashbin of history. And if the success of the 2019 film is any indication, the Child’s Play franchise will continue to be around for a long while still.

See where it all began with the original Child’s Play, airing Wednesday, August 19 at 8 pm/5 PST on THIS.