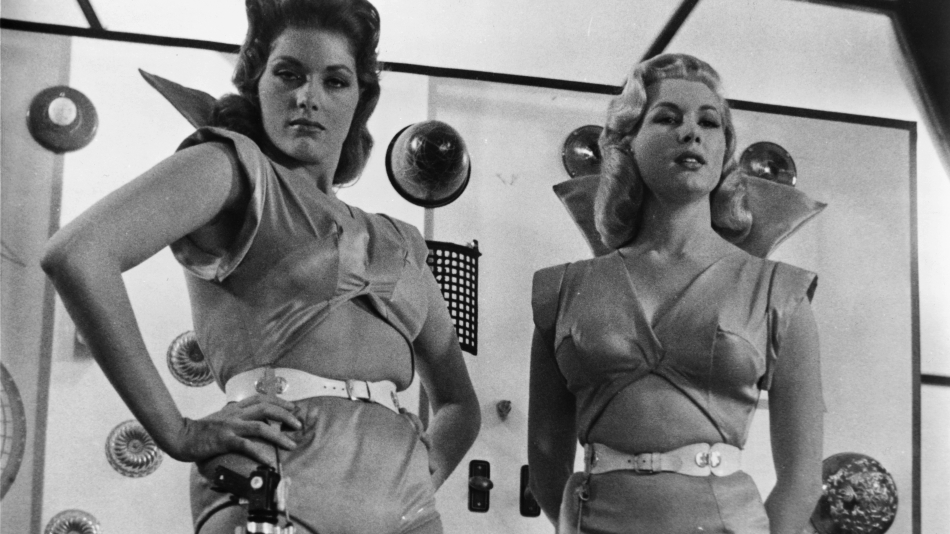 These Are the Seven Thirstiest Old Sci-Fi Movies

The sci-fi movies of the 1950s and ’60s are mostly remembered for their hokey special effects, their rah rah patriotism, and their propensity for oversized monsters. But there is another surprising aspect present in a number of these films that frequently gets overlooked: Their thirstiness. The B movies of the mid-twentieth century were surprisingly thirsty, as several of them featured scantily-clad women with amorous intentions. But which among these films were the thirstiest? Take a look below for our answer.

The idea of an all-female primitive society is hardly a new one, with tales of the Amazons going back to Ancient Greece. So it’s no surprise that similar societies pop up in old sci-fi movies, like this 1952 example about some WWII pilots who end up on an island full of dinosaurs and, as the title suggests, “untamed women.” If you’re looking for enlightened cinema, this ain’t it.

She’s beautiful, buxom, and bikini-clad. She’s also a 50-foot-tall raging hormone monster who’s out for revenge on her no good, cheating husband. This 1958 B movie’s absurdity is only surpassed in its thirst.

4. Invasion of the Star Creatures

If you’re looking for believable acting, you won’t find it in this ultra-low-budget 1962 sci-fi comedy about a couple of U.S. Army privates who stumble upon an alien plot to take over the world. So how do these G.I.s save the planet? Why, by making out with the supermodel-like aliens, of course!

5. Dr. Goldfoot and the Bikini Machine

As the ’60s went on, it became more and more likely for thirsty sci-fi movies to have a comedy aspect to them, but that doesn’t make them any less leering. Take this 1965 Vincent Price vehicle for example. It’s about a mad scientist who creates bikini-clad robot women that he intends to use to bilk the world’s richest men out of their vast fortunes. The film seems more in line with ’90s comedy Austin Powers than fellow ’60s sci-fi flick 2001: A Space Odyssey.

In a reversal from most of the films on this list, the plot of this 1967 gem sees Martian men invade the Earth looking for mates, so we’re spared the tired “all-female alien society” trope. Of course, for some reason, these Martians are only interested in Earth’s absolute best-looking women, so don’t expect the plot to be too progressive.

This 1968 campy cult classic starred Jane Fonda as a naive outer space adventurer who learns all about sex over the course of the film. After she opens the film by performing a zero-g striptease, it becomes pretty clear that this isn’t a Star Wars movie.

Quench your sci-fi thirst with back-to-back showings of Mars Needs Women and Invasion of the Star Creatures, airing Saturday, July 18 at 3 pm/2 C on THIS.