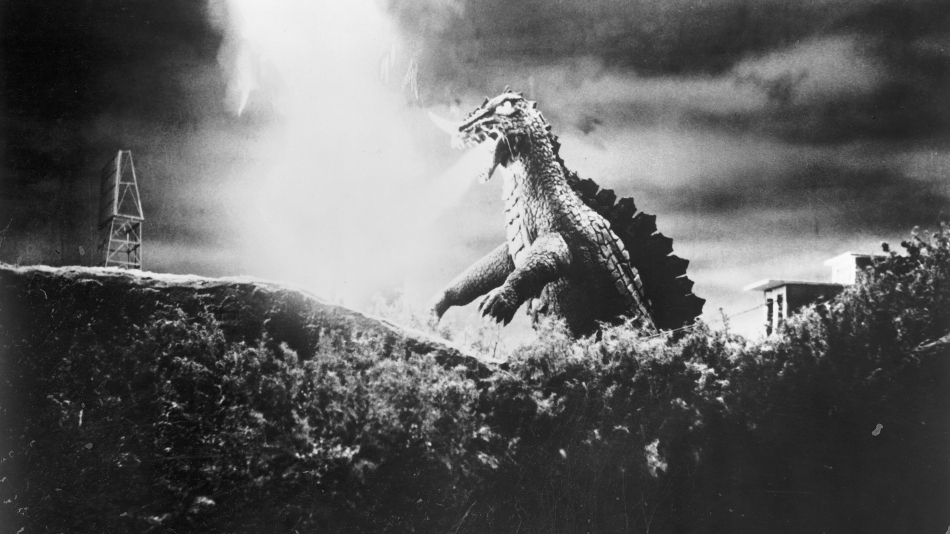 Godzilla is one of the most iconic movie monsters ever, so naturally, the big guy has seen a number of clones crop up since his big-screen introduction back in 1956. They say imitation is the greatest form of flattery, but after looking at some of these Godzilla knockoffs, we’d begin to question the wiseness of that assessment. Godzilla has inspired some downright ridiculous movie monsters, but we’d be lying if we said we didn’t enjoy watching these rubber-suited beasts destroy cities and do cause mayhem. So take a look below at our five favorite silly Godzilla wannabes and ponder why none have achieved iconic status.

1. Yongary, Monster From the Deep

In this 1967 Korean film, a creature that’s nearly identical to Godzilla save for a horn on its nose is awakened following an earthquake. The monster, Yongarry, consumes electrical energy and goes on a destructive spree — that is, when he’s not taking a dance break.

This 1961 Danish-American production is totally bonkers, as its titular monster comes into being after regenerating an entire body from a frozen tail that was discovered. He goes on a rampage in Godzilla-esque fashion until the army shoots drugs down his throat to incapacitate him. It’s an ironic way to take him down, considering that the people who made this movie were almost certainly on drugs.

Not all Godzilla imitators come from outside of Japan. This film was produced in Godzilla’s own backyard, but it’s a wee bit more absurd than most Godzilla flicks. It’s about a giant baby bird-lizard that comes into the possession of a Japanese version of Hugh Hefner who refuses to give it up. That is until its two gigantic and indestructible parents come calling.

The poster for this 1961 British film declared it was “like nothing you’ve ever seen before,” when in fact, it looked an awful lot like Godzilla with a bit of King Kong thrown in. A giant creature, nearly identical to Godzilla, is discovered in Ireland following a volcanic eruption and is quickly displayed in London as a public spectacle. But then his much bigger and even more Godzilla-like mother shows up, and she decides that she really wants her kid back and has no regard for London’s many historical buildings.

5. The X from Outer Space

This one might be the wildest Godzilla clone of them all. The movie is regarded for its odd humor, its surprisingly hip ’60s bossa nova score, and, of course, its monster, Guilala. The beast comes from Mars, beginning life as a tiny spore that hitches a ride to Earth on a Japanese spaceship before growing into a giant, triangle-headed lizard that can also turn into a flying ball of fire for some reason. Like we said, this movie is cray.

THIS is giving you the opportunity to tremble before two of these creatures on Sunday, May 9 with back-to-back airings of Yongary, Monster from the Deep and Reptilicus starting at 3 pm/2 C.