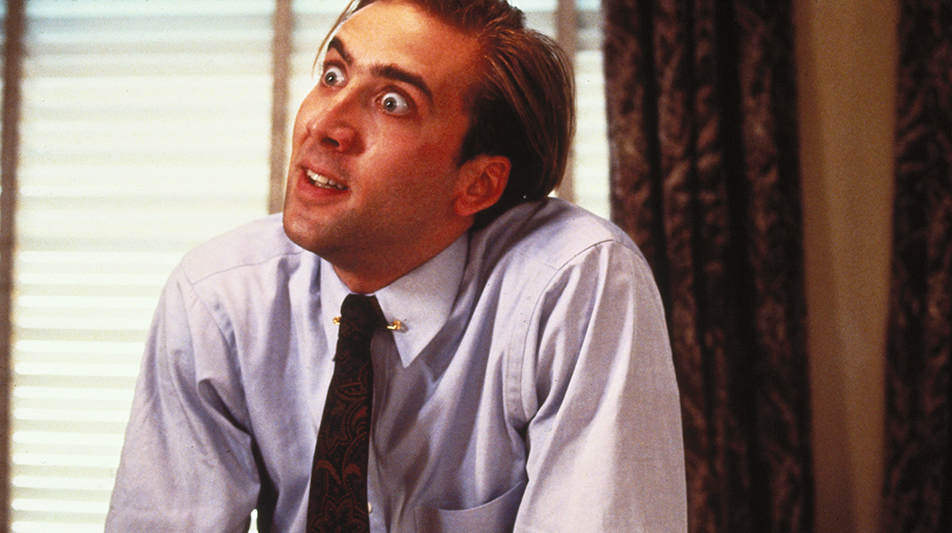 The Absolute Most Bonkers Roles of Nicolas Cage

A lot of actors are capable of turning in an unhinged performance now and again, but none of them can hold a candle to Nicolas Cage. The Oscar-winner has made a career out of ridiculously over-the-top performances, to the point where it’s more shocking when he actually acts normal in a movie rather than like a complete psycho.  But which of Cage’s many crazy roles rank as his most bonkers? We’ve gathered up what we believe are the eight most ridiculous roles Nic Cage has ever taken on, so take a look below and let his unbridled insanity wash over you.

In this ’90s action movie from John Woo, Cage’s master criminal and John Travolta’s by-the-book detective literally swap faces, allowing each of the actors to portray the other. It leads to an all-out hamfest between the pair as they each try to outdo each other by acting crazier and crazier as the film goes on, and it’s absolutely glorious.

This remake of the ’70s horror classic has been lambasted by critics, and it’s not hard to see why. This is not a good movie, but no one can argue that it isn’t entertaining. Cage stars as a cop who runs afoul of a cult, which leads to all sorts of unusual predicaments… to put it lightly.

One of Cage’s most recent trips to Crazytown occurred in this 2017 horror-comedy. The movie’s plot about parents being hypnotized into trying to kill their children allows for Cage to go as nuts as physically possible, and his multiple attempts at murdering his kids in the film are anything but subtle.

What do you get when you combine Cage with the King of Weird Movie Directors, David Lynch? You get this film, where Cage plays an Elvis-obsessed, snakeskin jacket-wearing criminal named Sailor. Cage brutally beats a man to death in the first scene of the movie, and things just get crazier from there.

This neo-noir film sports a Rotten Tomatoes rating of zero percent, and somehow even that seems too high. Cage has a supporting role as a drugged-out gangster with a horribly bad haircut, and he dials it up to 11 for literally every scene he’s in.

Another drug-fueled Cage adventure, this one stars Cage as a cop who becomes addicted to narcotics following a back injury. Throughout the film he takes more and more drugs and gets crazier and crazier, seeing visions and having a number of outbursts filled with maniacal laughter. In other words, it’s a classic Cage performance.

This 2016 comedy flies under the radar compared to some of the other entries on this list, but it absolutely represents Cage at his most ridiculous. He plays an unstable man who believes God told him to kill Osama bin Laden, so he travels to Pakistan in an attempt to do just that. The only thing more unbelievable than Cage’s performance in the film is that it’s based on a true story.

If you’re going to point to one Cage performance as his absolute most off-the-wall, it has to be this one. Cage plays a businessman who believes that he’s turning into a vampire after a one-night stand with a mysterious woman. It’s a ridiculous premise, to be sure, but Cage takes his character to such insane heights that the fact he thinks he’s a vampire becomes maybe the least odd thing about him. You can see for yourself by tuning into Vampires Kiss on THIS on Friday, Feb. 7 at 12 pm/11C.