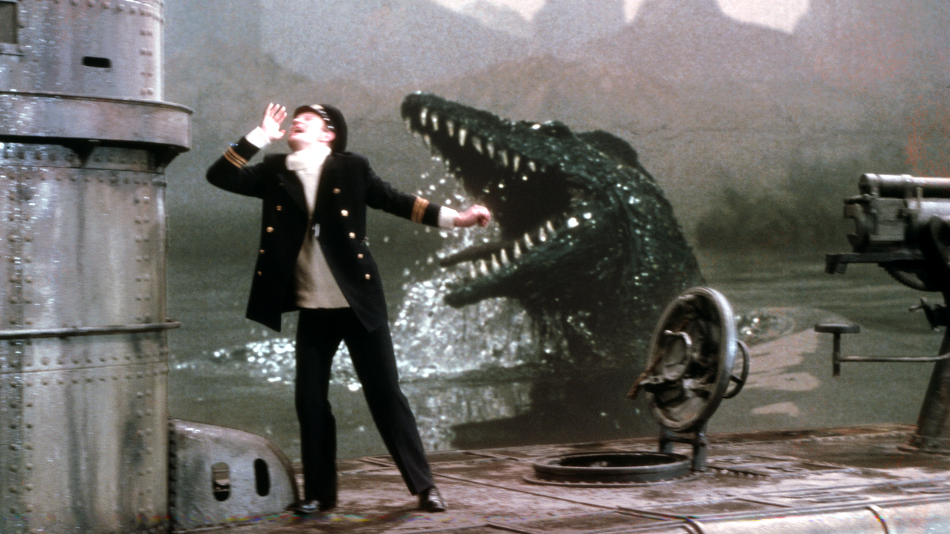 Jurassic Park undoubtedly rewrote the book on dinosaur movies. The film revolutionized film special effects while spawning one of the most successful franchises in film history. But Jurassic Park is not the be-all and end-all of dinosaur movies. The giant prehistoric beasts have been terrorizing audiences for almost as long as movies have existed, and below you’ll find six dinosaur movies that are a far cry from anything Jurassic-related but are still plenty enjoyable.

2. The Land that Time Forgot

This 1975 adventure is based on the eponymous novel by Tarzan author Edgar Rice Burroughs about a hidden land where dinosaurs still roam. It was a box office hit and led to an equally fun and silly sequel two years later in The People that Time Forgot.

3. Baby: Secret of the Lost Legend

In this 1985 family film, a team of scientists go on an expedition to Central Africa to try and locate a dinosaur-like creature called Mokele-mbembe that’s said to inhabit the region. They end up discovering a population of brontosauruses in the jungle, including a baby bronto that they name, you guessed it, “baby.”

4. The Valley of Gwangi

Ever wonder what would happen if cowboys and dinosaurs co-existed? Well, wonder no more because that’s exactly what happens in this delightfully cheesy 1969 dinosaur Western.

Sir Arthur Conan Doyle’s titular 1912 novel about a section of the Amazon where dinosaurs and other strange creatures roam has been adapted into numerous motion pictures, but this original from 1925 is the most noteworthy. Its stop-motion animated dinosaurs were revolutionary for the time, and the film was deemed prestigious enough for preservation in the Library of Congress.

6. The Land Before Time

Not all dinosaur movies are live-action. This 1988 animated effort from Don Bluth is one of the most beloved animated films of the decade, with a mother longneck death scene that’s just as traumatizing as anything Disney’s done.

You can have a dino-tastic weekend on THIS with back-to-back airings of The Land that Time Forgot and The People that Time Forgot, starting Saturday, May 23 at 3 pm/2 C.