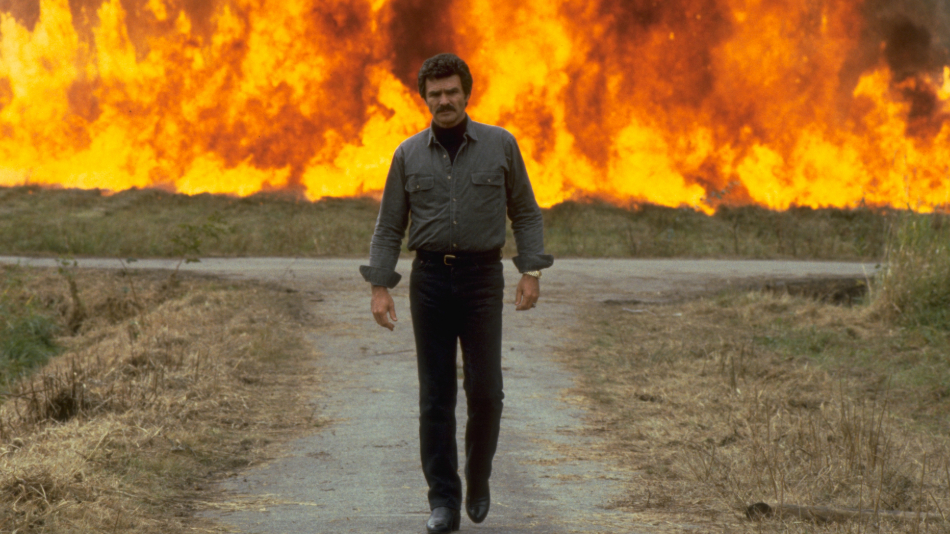 It’s been over a year since Burt Reynolds passed away, but the world still hasn’t forgotten one of the biggest stars to ever pass through Hollywood. During the heyday of his career, Burt Reynolds was the epitome of cool. A guy who made mustaches look good, who made fun movies with his friends, and who could pose nude on a bearskin rug in Cosmopolitan magazine without being made fun of for it (okay, maybe he was made fun of a little for that). There’s never been anyone quite like him, so to celebrate his life and career, here are our picks for Reynolds’ seven coolest roles.

The late ’80s were an interesting period in Reynolds’ career. His ’70s heyday was over, and he was struggling to find his way in a new action movie landscape filled with musclebound heroes like Schwarzenegger and Stallone. He never did quite recapture his old stardom, but in Malone, Reynolds’ still puts up one heck of a fight as a recently-retired CIA hitman who goes up against some small-town white-nationalist thugs in Oregon. Nobody walks away from an explosion like Malone.

One of Reynolds’ most-beloved characters for sure, Gator is a southern bootlegger and ex-con who likes to have a good time. He spends his time driving fast cars, romancing women, and blowing stuff up. They say crime doesn’t pay, and maybe it doesn’t, but Gator sure makes being on the wrong side of the law look awfully fun.

Shamus is one seriously cool customer. He’s a wise-cracking private eye who knows when to tell a joke, when to throw a punch, and when to land a kiss. Shamus may not be the most famous Burt Reynolds’ character, but in many ways he epitomizes the height of ’70s cool that the actor represented.

As a former all-star pro football quarterback, Crewe was already pretty cool — but kind of a jackass. After being sent to prison, he becomes more humble, befriending his fellow inmates and leading the team in an uplifting football game against the jail’s corrupt guards. Now that’s cool.

Until you use a bow and arrow to save your friend from being assaulted by a hillbilly in the woods, you can never claim to be as cool as Reynolds’ character in Deliverance [insert creepy banjo music here].

Playing opposite of Clint Eastwood’s tough-guy/straight man, Reynolds’ character in this ’30s-set detective movie gets all the best lines. As the trailer states, he’s a “wise-cracking gumshoe” — trust us, it’s cooler than it sounds.

7. Bandit in Smokey and the Bandit

Without question, this is Reynolds’ best-known role, with the film being the second-highest-grossing film of 1977 after a tiny, forgettable movie called Star Wars. As Bandit, Reynolds drives a Trans Am, makes Sally Field swoon, and antagonizes a cocky small-town sheriff while illegally hauling beer across state lines. It doesn’t get much cooler than that.

For a dose of Reynolds at his coolest, tune in to Malone on THIS. See our schedule here for details.