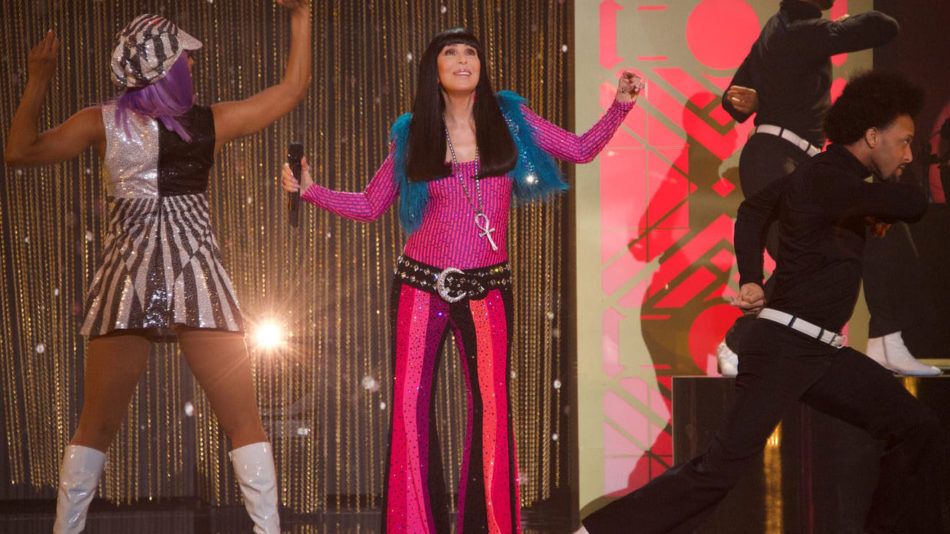 Even at 73 years old, Cher remains one of the most exciting names in entertainment. Don’t think so? Just take a look at the singer’s performance on the season 28 finale of Dancing With the Stars and you’ll be singing a different tune (probably “The Beat Goes On”).

On November 25, the singer and actress performed during the season finale of the ABC dancing competition, proving that she hasn’t slowed down one bit as she heads into her seventh decade in entertainment. Donning a brightly-colored, sequin-covered, bell-bottomed jumpsuit (naturally) and surrounded by miniskirt and leather jacket-clad dancers on a groovy ’60s-themed stage, the Moonlighting star belted out a touching rendition of the Sonny & Cher classic “The Beat Goes On,” with her deceased ex-husband and former singing partner Sonny Bono contributing his parts of the duet via a large video screen.

While Cher has never really gone away — she probably has more “comebacks” than anyone in show business — her visibility has really had an uptick since last year. She co-starred in the blockbuster sequel Mamma Mia: Here We Go Again — her first film in nearly a decade, she released a record that reached number one on the Billboard US Top Album Sales chart — a first for her career, and she embarked on a world concert tour in 2018 that’s set to stretch well into 2020. Clearly, for Cher, the beat goes on still.

If you can’t get enough Cher (who can?), be sure to tune into THIS in December as we’ll be airing two of her classic films: the 1987 romantic comedy Moonstruck, co-starring Nicolas Cage, and the 1990s family dramedy Mermaids, featuring a young Winona Ryder as Cher’s quirky daughter. Check out our schedule here for viewing times in your area.